White Arkitekter and ReGen Villages, based in Silicon Valley, have joined forces to create circular, self-sufficient and resilient communities in Sweden.

The vision encompasses: doorstep, high-yield, organic food production; locally produced and stored energy; comprehensive recycling; and climate-positive buildings – all combined, democratised and scaled up thanks to an operating system inspired by computer games.

Over the last four years, ReGen Villages has met with several Swedish municipalities, landowners, property developers and stakeholders; it’s now close to its goal of launching a pilot project starting this year.

Municipalities and property developers are faced with an escalating climate crisis, heavy population growth and urbanisation, as well as a housing shortage. White and ReGen Villages Sweden are looking to address these issues – while also meeting the Sustainable Development Goals – by developing self-sufficient communities in and around cities. White will be in charge of the overall site planning and the design of energy-positive buildings, including housing.

Ulla Bergström, managing director at White Stockholm, said: “Self-sufficiency and circularity make our cities and communities less vulnerable by lessening the load on central infrastructure. They’re becoming key aspects of sustainable urban development and we’re thrilled to be able to soon show what this can look like in practice.”

A ReGen Village is based on climate-smart technologies, which are adapted to site-specific conditions. The need for food will be largely met by new technologies, such as vertical farming and aquaponics – a closed system in which fish farming and crops are combined symbiotically. Energy will be secured through solar panels and biogas produced from local waste. Water is collected, cleaned and reused.

Using AI on a community level

The technologies are combined into a single circular system with the help of Village OS, developed by Regen Villages Holding and based on AI technology and machine learning. Said to enable the development of similar self-sufficient communities around the globe, the system is reminiscent of so-called ‘smart homes’, in which several home amenities are online and can be controlled from a central hub. According to Regen Villages, the Village OS can, in a similar way, make entire communities ‘smart’; in practice, this means that all neighbourhood systems can be operated and balanced digitally.

ReGen Villages Sweden is a subsidiary of ReGen Villages Holding and was founded by James Ehrlich, a senior technology analyst and entrepreneur in residence at Stanford University, with a background in computer gaming.

“Scalable, innovative solutions are the answers to the challenges of the future,” said Ehrlich. “The collaboration with White will give Sweden and the Nordics the world’s first economically, ecologically and socially sustainable communities for ordinary people.” 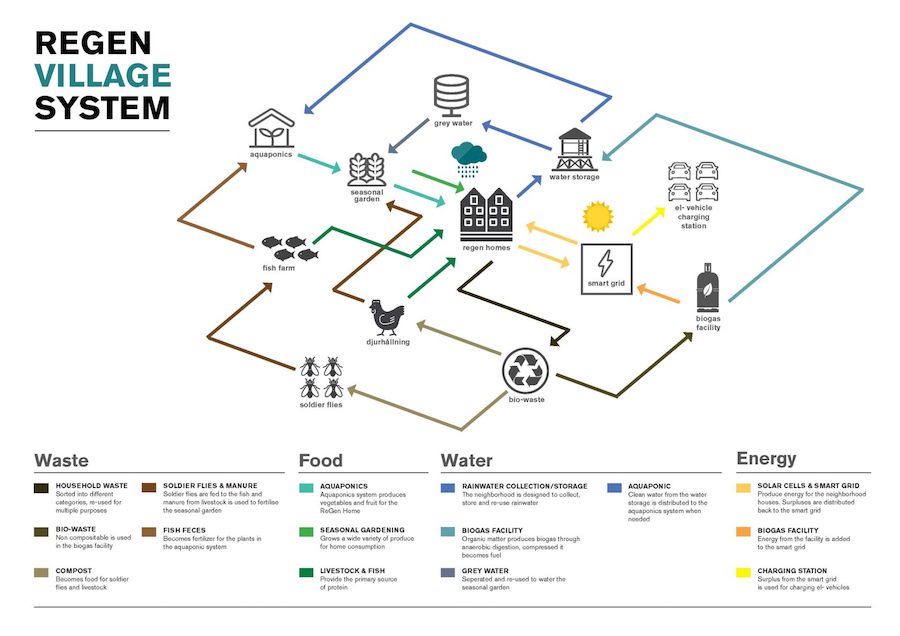 The concept is based on five core principles, enabled by Village OS:

Village OS is described as working as a bridge between nature and different technological systems that are combined and optimised. Computer systems will monitor farming, energy use and water flows, while the smart homes are also connected to the system. The idea is that the local housing co-operative can use the system to run the entire community’s daily operations.

Each ReGen village is approximately 250,000 square metres, with a quarter of the area occupied by buildings, including 250–300 residential. The rest of the area is used for the different systems, such as farming and food production, energy production and water management.