A smart city project to design a new kind of mixed-use, complete community on Toronto’s Eastern waterfront has been abandoned owing to the economic uncertainty caused by the coronavirus.

The project to create a new neighbourhood called Quayside had been delivered through a partnership between Alphabet-owned Sidewalk Labs, a sister company of Google, and Waterfront Toronto, a government regeneration agency.

In October 2017, the two organisations had set out a shared vision for Quayside to become the global hub of a new industry focused on urban innovation to improve the quality of city life. The project would tap into Toronto’s tech sector and develop innovations that could benefit communities and neighbourhoods elsewhere in the city. Potential innovations ranged from climate-positive energy systems for improved standards of sustainability, to self-driving transit that makes streets safer, to new construction techniques bringing about lower housing costs.

In a statement published on 7 May on the online publishing platform Medium, the chief executive of Sidewalk Labs, Daniel L Doctoroff, said it no longer made sense to proceed with the Quayside project. The reason: the unprecedented economic uncertainty, which means it is too difficult to make the 12-acre project financially viable “without sacrificing core parts of the plan we had developed together with Waterfront Toronto to build a truly inclusive, sustainable community”.

Despite the termination of the project, Doctoroff said the pandemic has reinforced the organisation’s belief about the importance of reimagining cities for the future.

“I believe that the ideas we’ve developed over the last two-and-a-half years will represent a meaningful contribution to the work of tackling big urban problems, particularly in the areas of affordability and sustainability,” he said. “This is a vital societal endeavour and Sidewalk Labs will continue our work to contribute to it.”

He continued: “On these fronts, we’ve already started innovative companies addressing urban mobility, next urban mobility, next-generation infrastructure and community-based healthcare, and invested in start-ups working on everything from robotic furniture to digital electricity. We continue to work internally on factory-made mass timber construction that can improve housing affordability and sustainability, a digital masterplanning tool that can improve quality-of-life outcomes and project economics, and a new approach to all-electric neighbourhoods.”

Doctoroff ended his statement by stressing that the Quayside project was important to Sidewalk Labs and describing the decision to end it as difficult, but the scheme has attracted much controversy and criticism from several quarters.

The MIDP had described more than five dozen innovations combined in a single place, with the aim of marrying advanced technology with urban design to dramatically improve quality of life. But a report, featuring commentary from members of Waterfront Toronto’s Digital Strategy Advisory Panel (DSAP), described the document as somewhat unwieldy, repetitive, and overly focused on the “what” rather than the “how”. 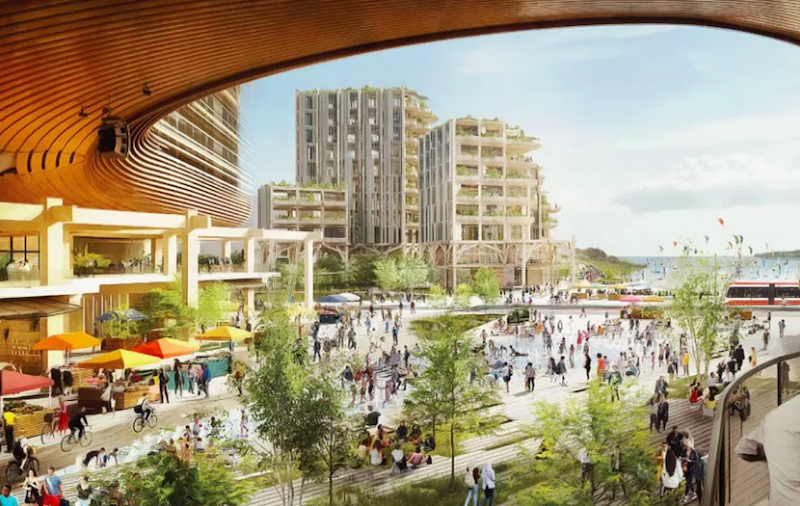 Comments indicated the scope of the proposal as unclear and/or concerning – and some panellists went as far to suggest that certain innovations were irrelevant or unnecessary. Panellists also felt that the MIDP failed to put the citizen at the centre of the design process for digital innovations, as was promised at the outset. The report stated that, at a minimum, the city’s residents – and any groups most impacted by a particular technology – should have been given agency throughout the design process.

Significant concerns were also raised about the proposed digital governance mechanism, the Urban Data Trust, as well as the potential for the mass collection of data.

In June last year, The Guardian reported that US venture capitalist Roger McNamee had warned that technology companies cannot be trusted to safely manage the data they collect on residents.

Writing about the Quayside project to the city council, he said: “The smart city project on the Toronto waterfront is the most highly evolved version to date of … surveillance capitalism”, suggesting that it will use “algorithms to nudge human behaviour” in ways to “favour its business”.

Appealing to officials that the project should be scrapped, he described it as “a dystopian vision that has no place in a democratic society”.