Armstrong has announced that its Health Zone ceiling systems and Clean Room Grid systems – currently helping protect staff and patients in hospitals and healthcare facilities – will now be made available to all building owners who want occupants to be and feel safer indoors.

According to a recent McKinsey survey of 100 executives in the United States, the respondents believed that 88 per cent of their US workforce would be back in the workplace by December, and around 80 per cent would be on site by September.

If these expectations play out, employers will likely have two major concerns: reducing workplace disease spread and helping employees feel safe. Armstrong says its solutions are designed to contribute to cleaner, quieter and healthier spaces, all of which are important attributes to help building owners address post-COVID-19 safety concerns.

Building owners are seeking to make their interiors safer and healthier owing to the pandemic. According to a survey, the three most popular actions beyond enhanced cleaning are: space layout or reconfiguration changes (85 per cent); upgrades or changes to HVAC systems (64 per cent); and the addition of walls or dividers (61 per cent).

Indoor air flow is impacted by many variables, particularly in interior environments where air movement is affected by fans, diffusers, ceilings, walls and people. Architects and building owners looking to retrofit existing facilities or design new spaces can incorporate products being used today to protect people from diseases in healthcare environments, for use in any indoor space, says Armstrong. 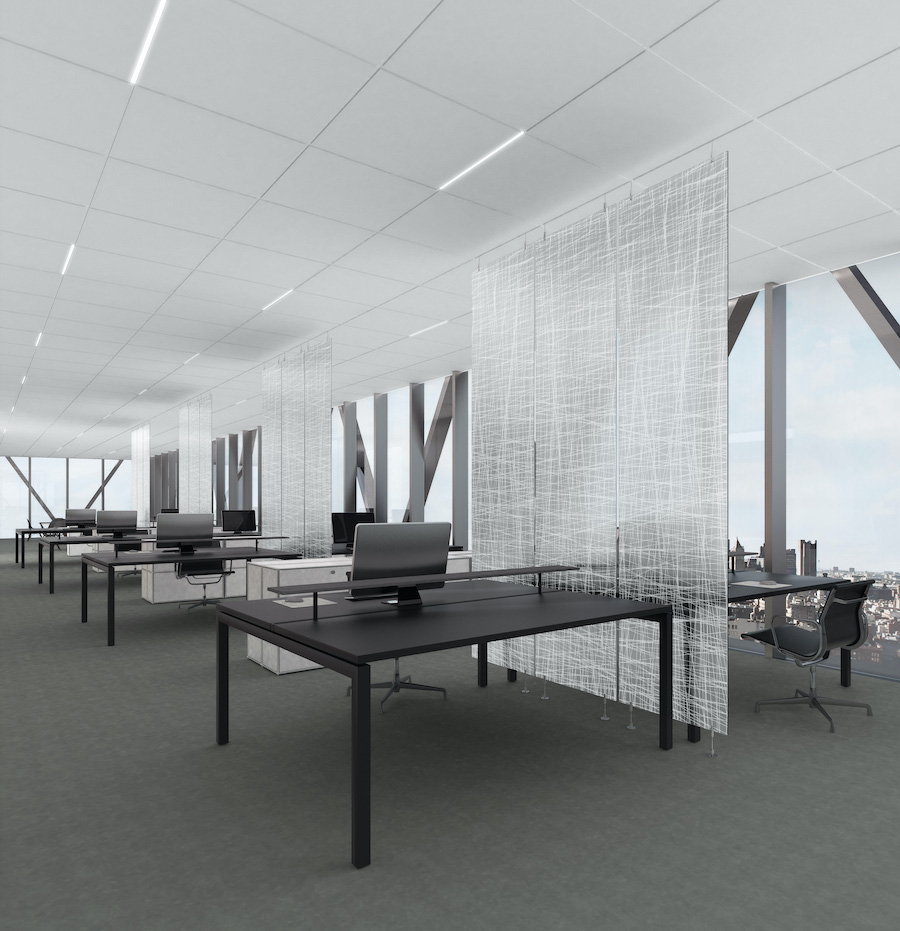 “Healthcare organisations across the country are using negative pressure rooms, gasketed ceiling systems and filtration devices to reduce transmission of viruses,” said Dr Jeffrey Siegel, leading air filtration expert at the University of Toronto. “This approach hasn’t been widely adapted to the workplace or education settings yet but could provide a health benefit or cleaner air in those settings.”

Ceilings play an integral role in the effectiveness of these approaches used in healthcare facilities. Armstrong’s Health Zone ceilings with BioBlock Plus performance are said to resist the growth of bacteria, mould, mildew and odour on the ceiling tile surface. They’re also reported to be water repellent, washable, sustainable, recyclable and safe for use with disinfectants.

Health Zone panels, says the company, exceed Facility Guidelines Institute requirements for cleanability and acoustics in general healthcare spaces. These panels can be paired with gasketed clean room suspension (grid) systems in areas where air pressure is used to redirect contaminated air away from occupants, the firm adds.

“In most buildings, the ceiling grid and panels are effectively part of the supply and return air ducting,” said Rives Taylor, director of design resilience at Gensler architecture. “Investing in a gasketed suspended ceiling where there are concerns about recirculation of contaminated air should be considered. This potentially helps any effort to filter the air.”

Beyond the ceiling, Armstrong is also introducing a new line of vertical panels, which, it says, provides a design-oriented approach to creating greater separation between people. Described as nonporous and easily cleanable, the translucent wall partitions can transform existing shared spaces into protected and segmented zones.

Called Infusions Resilient Partitions, these standard 24-inch x 96-inch wall panels are easy to install and can reconfigure existing layouts to meet social distancing guidelines. They are described as artfully designed, come in a variety of patterns and colours, and can be hung from ceilings or walls.