Over a third of people commit to stay-at-home rules, global survey finds

Danish urban design studio Gehl has released the findings from a global survey on public space usage during the COVID-19 pandemic, revealing the extent to which people have stayed away from public space while restrictions have been in place.

More than a third (35 per cent) of respondents reported staying at home except for essential errands. The remainder who ventured into public space relied heavily on destinations at their doorsteps – from neighbourhood streets and sidewalks to local parks and front stoops. Places that may have once been relegated to passing through are now places for exercising, decompressing and socialising at a safe distance – especially for those at greatest risk of isolation and infection.

Facing a global crisis with severe personal costs, respondents are leaning on their neighbourhoods as a crutch for maintaining their physical and mental health. Gehl believes that understanding and fulfilling these deep human needs will be critical in both the short- and long-term response to the pandemic.

The online survey collated the responses of more than 2000 respondents from 40 US states, 68 countries, and every continent. It was carried out over ten days in April, with the findings giving insight into the initial pulse of public space usage globally. Gehl concedes, however, that access to quality open space is highly variable from block to block, neighbourhoods to neighbourhoods, and city to city. In the coming months, the company plans to deepen its research of shifting public space usage in partnership with its clients in different cities around the world.

Several of the main findings from the online survey are described below.

Opting to stay inside

More than a third of respondents (35 per cent) are staying out of public spaces except for essential needs – and this is more the case for people living outside the United States.

Survey respondents are not necessarily tied to any one group but where a marked difference in respondents’ likelihood of going outside was noted was in their geographic origin. People living in the United States were 13 per cent less likely than their global counterparts to opt out of using public space – a difference that could be attributed to varying severity in the US and international lockdown measures. As cities around the world plan for many months of physical distancing, Gehl is urging city leaders to make it safe and comfortable for all people to spend time outside, as opting into public space cannot be a long-term solution.

People are using their neighbourhoods streets, sidewalks and parks most of all – and experience crowding when they do.

About two-thirds of respondents are using public spaces at least daily (51 per cent daily, 16 per cent several times daily) and when they do, they are flocking to spaces nearby. The top public space destination was people’s neighbourhoods street and sidewalk, cited by 87 per cent of respondents. Next came venues for essential errands (eg, grocery stores, garbage) at 72 per cent, neighbourhood parks at 67 per cent, and respondents’ stoops, yards or courtyards at 59 per cent.

While people are relying on these spaces for basic needs, 91 per cent of respondents globally report experiencing crowding when they venture into public space. This was most true when running essential errands, where 59 per cent of respondents experienced crowding. And those 65 years or older were 12 per cent less likely than their younger counterparts to head outside for essential errands.

The next most-cited places where people felt crowded were neighbourhood parks (cited by 32 per cent of respondents), neighbourhood streets and sidewalks (26 per cent), and main streets / destination streets (26 per cent). Based on analysis of responses from the United States, the experience of crowding in neighbourhood public spaces was particularly high in denser, more urban geographies. 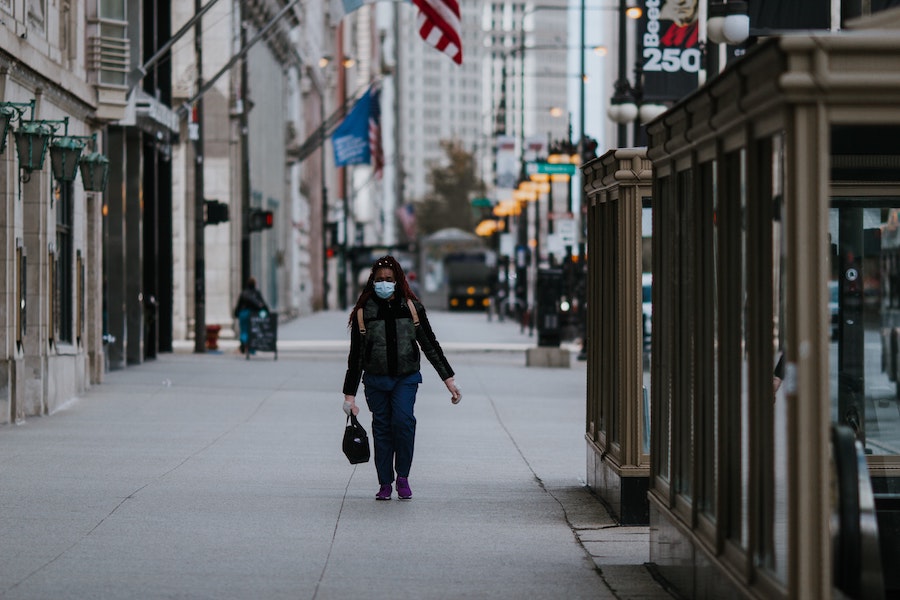 The findings prompted Gehl to suggest a raft of design solutions to help. They include: re-allocating space to allow for more physically distant walking, biking, exercising and staying; prioritising space re-allocation measures in neighbourhoods without walkable access to park space and near essential services; opening up shuttered spaces where safe to do so; and managing flow into more congested public spaces by expanding the number of entrances where possible, or by designating gateways as entry- or exit-only.

Respondents – and especially those most vulnerable to COVID-19 – are going outside for activities that benefit their physical and mental health. The most common reasons people gave for using public space were exercise (81 per cent of respondents who said they were using public space) and relaxation (72 per cent).

According to Gehl, these findings signal the vital role of safely designed and managed public spaces, particularly for the most vulnerable who need to access them more than ever. Proposing a number of possible design solutions, Gehl suggests: exploring the possibility of “running lanes” alongside bike lanes and extended sidewalks, to mitigate conflicts and keep distance between runners, cyclists and pedestrians; expanding bike lanes in highly trafficked areas to reduce distance between cyclists without fear of automobile collisions; and dedicating access to select portions of open spaces for older people to exercise.

More than half of respondents (58 per cent) reported safely socialising with people outside of their households – and those most at risk of social isolation are doing so at especially high rates.

When breaking down by household type, it’s no surprise that people who live alone are making safe social interaction an especially high priority. And older respondents are prioritising social activity even as they face greater vulnerability to COVID-19, too. Among those aged 65 years or older, 41 per cent said they go outside for social interaction at a safe distance – compared to just 26 per cent of respondents under 65 years old. When it comes to social activities, the most ubiquitous was walking at a safe distance (cited by 37 per cent of respondents). This was especially popular among respondents who lived alone and among seniors.

To create more safe social public space for these groups, Gehl suggests that city leaders: explore how to adapt social and cultural programming offered by youth and community centres to new norms; adapt hyper-local programming (eg, block parties) to safe, physically distant norms; and ensure new open streets and spaces create opportunities for staying, at safe distances, and not just moving through a place, to support seniors and vulnerable populations who live alone.

A quarter of respondents reported they are biking more during the pandemic. Whether through greater adoption of walking or biking, the pandemic may present opportunities to make healthy, sustainable ways of getting around a more integral part of our behaviours in the long term, concludes Gehl. The company proposes that cities combat the fear factor for urban biking by creating more safe, roomy options for biking. It also suggests that cities implement more widespread traffic-calming measures throughout residential neighbourhoods, or limit car traffic altogether.

Many respondents remarked how the pandemic has elevated their appreciation for public space. One commented: “People are reclaiming their neighbourhoods’ streets. Biking, running and walking have increased in my neighbourhoods. Car traffic is down. The streets are quieter. I can hear birds. Despite the chaos of the pandemic, there is a calm to these COVID-19 streets.” And another respondent reflected: “It’s a revelation, showing us what the city could be like.”

Gehl concludes from its survey findings that if public spaces can be safely and creatively reimagined, designed and managed, they can be “community lifelines” for improving access to essential resources, keeping people fit, and reducing isolation.