A participatory process for modelling green infrastructure implementation in London

This paper describes an original systems-thinking approach to understand interactions between green infrastructure and health, developed jointly with members of the Greater London Authority and the Complex Urban Systems for Sustainability and Health (CUSSH) project.

Lecturer in Machine Learning for Smart Buildings and Cities, UCL

Cities face the interlinked challenges of transforming environmental quality, sustainability, population health and health equity. There is increasing interest in green infrastructure in connection with these challenges. In order to go beyond an understanding of the effects of green infrastructure and develop an understanding of how policymakers should think about it, we need to capture potential interactions and be aware of possible unintended consequences.

In our research, we applied a systems-thinking approach: integrating participatory engagements, qualitative system dynamics modelling, and an assessment framework in order to address the challenge. This allowed us to see multiple dynamics between the prioritisation of policymakers, different types of green infrastructure, and environmental and health outcomes. It also made us ask different and more integrated questions, and suggested a methodology for addressing the challenge of transforming cities.

Cities face the interlinked challenges of transforming environmental quality, sustainability, population health and health equity. There is increasing interest in green infrastructure in connection with these challenges.

Yet, the ambitious plans of transforming environmental quality, sustainability and population health need appropriate analytical methods to succeed; methods that foster holistic thinking, while engaging the community as well as policymakers.7 They need modelling approaches that integrate the physical infrastructure, as well as the decision-making and behavioural mechanisms surrounding our physical environment, and those that enable reliable analysis of future scenarios. In this way, we need a research design capable of capturing these interrelationships that exist at multiple different levels of abstraction8 – eg, individual behaviour; environmental, health and wellbeing effects; infrastructure; and the policymaking process. Single-focused statistical extrapolation methods are unable to achieve this, as they’re limited by the available data on the effects of green infrastructure health and wellbeing. In addition, they don’t integrate the limited available knowledge with potential side-effects and unintended consequences in the process of greening cities.

In our research, we applied a systems-thinking approach: integrating participatory engagements, qualitative system dynamics modelling, and an assessment framework in order to address the challenge. In this paper, we’ll report on our preliminary engagement with the Greater London Authority (GLA) on planning for green infrastructure. This collaboration is part of the Complex Urban Systems for Sustainability and Health (CUSSH) project, which aims at transformative urban change.

We focus on the mix of green infrastructure and how different types provide benefits for the population. We conducted our research in London because of the city’s strong focus on sustainability and heath equity. London has updated its Environment Strategy recently and set ambitions targets, eg, for more than 50 per cent of the city to be green by 2050.9 In addition, green infrastructure is an important element in the London Plan, the mayor’s spatial development plan for the capital.10 We worked with the Greater London Authority, the regional government of Greater London – in particular, the environment team responsible for the London Environment Strategy.9

We held several meetings with a key member of the environment team and conducted a small workshop with several of its experts in environmental issues and health. This was a participatory system dynamics and group model-building workshop, in which we developed a causal loop diagram of the interactions of the policy process with different types of green infrastructure and health. Later, we both simplified and added to the diagram, and conducted a literature review on the effects of green infrastructure on health. We also held a further workshop with a broader group of experts, including both academics and practitioners, on green space and urban planning. We presented the diagram in a slightly modified version, based on our interim research, to a group of participants, and asked for their feedback and improvements. This resulted in an extended causal loop diagram.

The causal loop diagram represents an aggregated view of our participants’ diverse expertise. It captures a number of interactions between policy elements, green infrastructure, and environmental and health outcomes through variables and causal arrows that represent their interrelationships. A plus next to the arrow indicates a same-directed relationship (cause and effect move in the same direction) and a minus next to the arrow indicates an inversely directed relationship (cause and effect move in opposite directions). Often, these form complete feedback loops. They’re mechanisms of influence that either reinforce (reinforcing loop) or counteract (balancing loop) the behaviour of the system. Feedback loops indicate that the results of past actions define the future situation.11 The diagramming process resulted in a variety of these feedback mechanisms. We’ll present the most important ones that elucidate what unintended consequences we need to avoid and how we can create areas of co-operation and momentum. 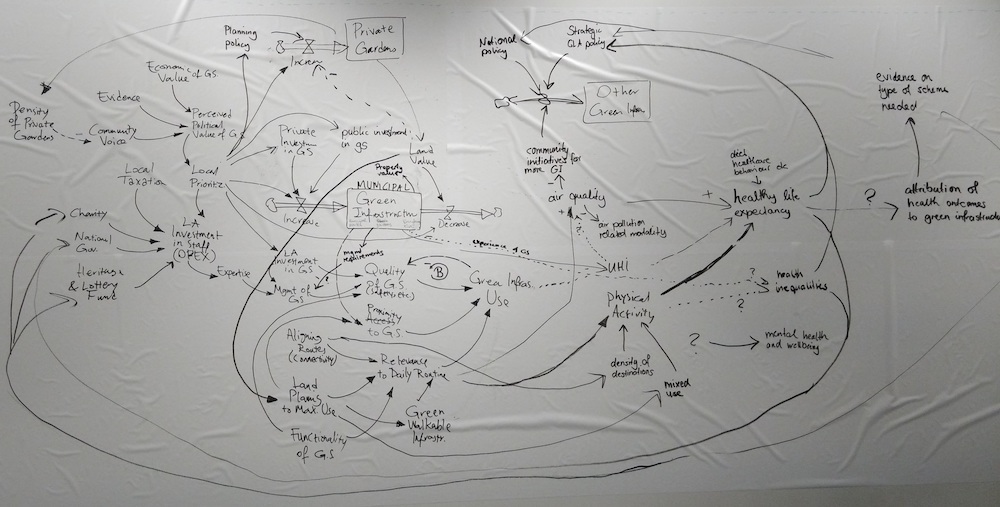 Participatory modelling of the system during an initial workshop produced the diagram shown in Figure 1. As much as it revealed knowledge about diverse relationships across multiple sub-systems, it also revealed a large number of knowledge gaps. As this diagram is very preliminary and only represents the first stage of the project, we use it simply to familiarise the reader with the type of outcomes. In our description, we focus on important mechanisms that emerged from a combination of the two workshops and further analysis.

We also used a transformation assessment framework in order to place green infrastructure into context (see Figure 2). It has the potential to interlink objectives and policy initiatives with sectors, intermediary and health outcome variables, as well as costs. It helps in thinking about which sectors and outcomes are addressed by certain objectives, such as the increase of green infrastructure, and which ones need to be addressed by further initiatives.

Participatory modelling of the system revealed the importance of distinguishing between different types of green infrastructure: large public green infrastructure; private gardens; trees and other plants providing cover on streets; green access routes (cycle pathways and walkways); and other green infrastructure such as green walls and roofs. Different types have fundamentally distinct characteristics that influence the nature and magnitude of impacts on health, some in unexpected ways; for example, Figure 3 indicates how municipal and other green infrastructure increase green space use and physical activity, and improve physical and mental health outcomes. Workshop participants, however, discussed that the effects may have very different strengths for parks, tree-lined streets and green buffer zones. In addition, they depend on further aspects not shown here, such as the connectivity of green spaces and their quality.

We also discussed further intermediary effects between green infrastructure and health such as the reduction of the urban heat island effect, as shown in Figure 4. In this way, there exist interactions between green infrastructure, physical activity, heat and health (although during winter, in addition to the positive health effects from physical activity, there can be potential negative health effects from the lack of urban heat islands and corresponding colder temperatures).

Yet, the method was also useful to point to potential unintended consequences, such as vector-borne and zoonotic diseases (see Figure 5); for example, Lyme disease. They might be an unintended consequence of the increase of municipal and other green infrastructure, especially when paired with global warming.

Green space use may also increase the perceived safety of public green spaces because more crowded places feel safer; for example, many people feel safer to go running in a populated rather than a deserted park or one that isn’t used by a broad variety of people. This in turn makes public green infrastructure or greened other infrastructure even more usable. This reinforcing mechanism “safety triggers use” is described in Figure 7. It can work both as a virtuous and a vicious cycle, with safety attracting a lot of use or the perception of an unsafe place preventing use. While some effects, such as the urban heat island effect, are independent of this use, this analysis showed that safety is a sine qua non (essential) if policymakers want green infrastructure to have any activity-related health effects. Policymakers therefore need to take steps so that the feedback mechanism shown in Figure 7 operates as a virtuous cycle. 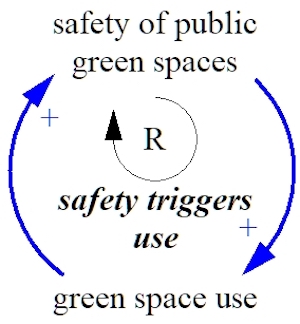 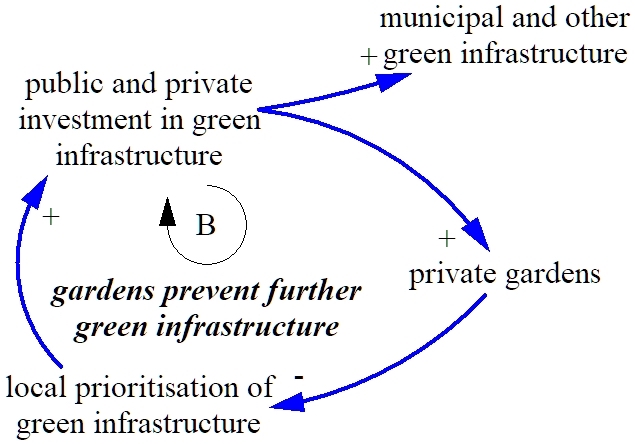 The garden side-effects in Figure 8 interact with an “opportunity cost” mechanism, described in Figure 9. Most types of green infrastructure add to the total area covered. This tends to increase property prices, making it more expensive to expand public green spaces or to plan for houses with gardens. This holds for both municipal green infrastructure and private gardens. The increased property values may also create a potential for gentrification. Therefore, to improve green infrastructure in a balanced manner – that is, to spend funds equally – focus should be applied to equity, and conducting impact assessments and work across councils. 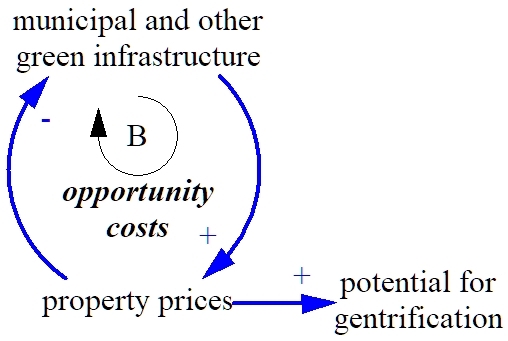 This article reported on the initial phase of the engagement with the Greater London Authority in the Complex Urban Systems for Sustainability and Health (CUSSH) project. It focuses particularly on the interactions between green infrastructure and health outcomes. We used a systems-thinking approach, combining participatory engagements, qualitative system dynamics modelling, and an assessment framework to place this into broader context.

This process helped us see multiple dynamics between the prioritisation of policymakers, different types of green infrastructure, and environmental and health outcomes. We therefore see that rather than asking “what are the effects of different types of green infrastructure?”, we need to ask much more nuanced questions. We also need to ask questions about use and safety, equity and gentrification, and the local policy process. We’ve not answered these questions yet, but this wider recognition makes it more likely to make real progress towards the significant challenges of climate change, sustainability, health inequalities and wellbeing.

Our work has described a methodology for addressing the challenge of transforming cities to become healthier and more sustainable. The rapid impact assessment framework helped establish a wider impact framework within which green infrastructure is placed. The system dynamics process helped include people’s perceptions (eg, of safety) and behaviours (eg, active travel, use of green space) more explicitly. Importantly, it also helped integrate this with the policymaking process and actions that local policymakers take (eg, prioritisation and extension of green infrastructure). Our methodologies capture the complex dynamic nature of cities while attempting to understand potential co-benefits, as well as unintended consequences of policies.

Future work will use the framework to perform a ‘Cities Rapid Assessment for Transformation’ (CRAFT) analysis. Considering interactions between different city objectives wherever possible, it will deliver broad estimates of the effect of city-wide environmental actions on relative changes in markers of environmental quality (eg, air pollution) and sustainability (eg, greenhouse gas emissions). It integrates across policy objectives, initiatives, and intermediary and health outcomes. In this way, an interdisciplinary approach can capture both dynamic complexity and outcome estimates of policy objectives.

Nici Zimmermann PhD is Associate Professor of System Dynamics at University College London (UCL), and corresponding author. Phil Symonds, PhD is a lecturer in Machine Learning for Smart Buildings and Cities, at UCL. Kaveh Dianati MSc is doctoral researcher at UCL. Arash Baghaei Lakeh PhD is formerly a research associate at UCL and now a consultant data scientist at QuantumBlack. Lawrie Robertson MA (Hons) Dipl (Arch) Arb RIBA is head of strategic planning, cities, at BuroHappold Engineering. Paul Wilkinson PhD is Professor of Environmental Epidemiology at London School of Hygiene and Tropical Medicine. Mike Davies PhD is director of the Complex Urban Systems for Sustainability and Health (CUSSH) Consortium, and Professor of Building Physics and the Environment at UCL.

The authors extend their thanks to collaborators at the Greater London Authority, Cassie Sutherland, Peter Massini, and Fiona Wright. This work is part of the Complex Urban Systems for Sustainability and Health (CUSSH) project, which is supported by the Wellcome Trust (project reference 209387/Z/17/Z).